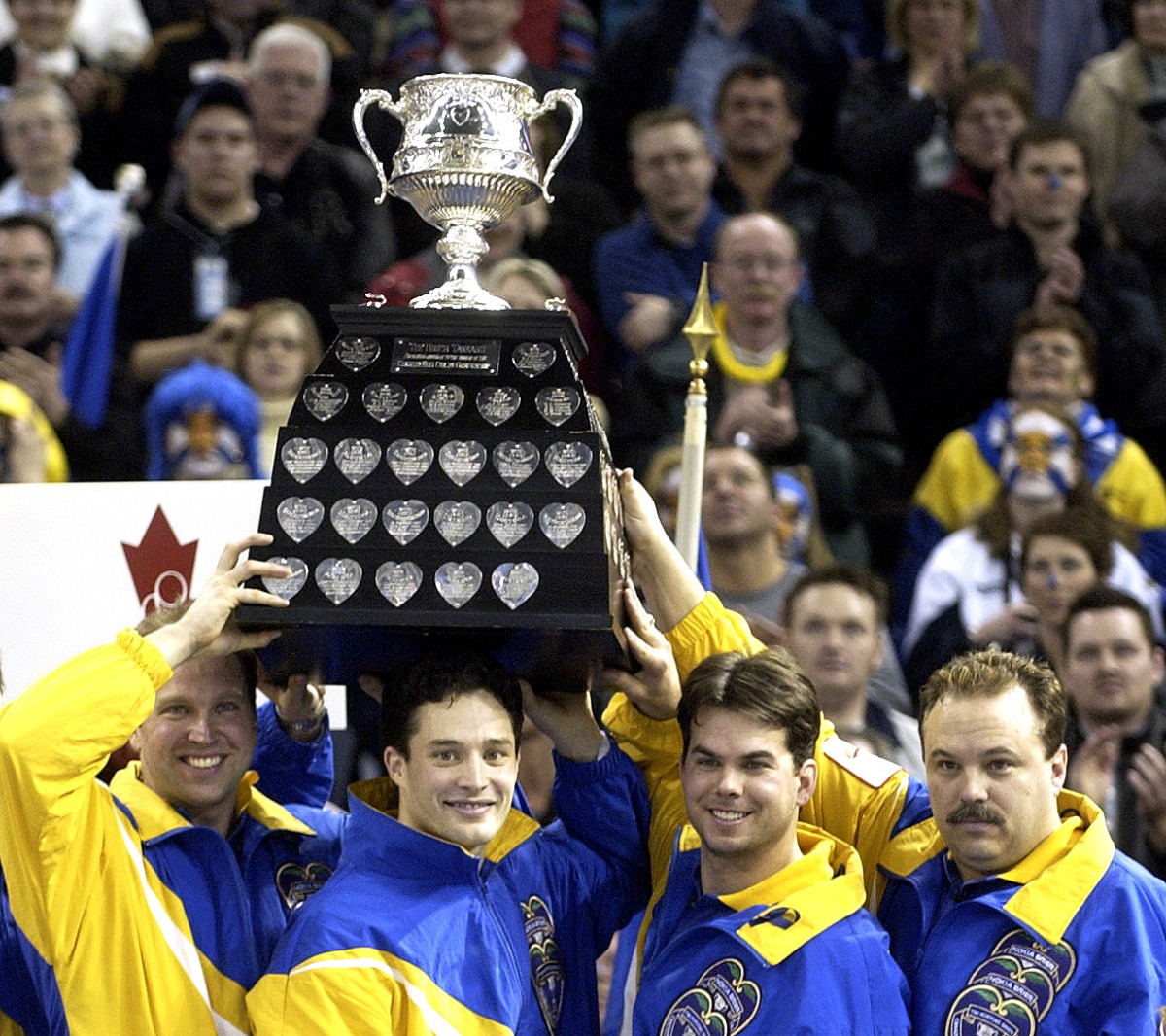 Randy Ferbey’s team of David Nedohin, Scott Pfeifer, and Marcel Rocque were one of the most successful curling teams of all time.  Known as ‘the Ferbey Four’, they won five consecutive Provincial men’s titles (2001-2005), four Canadian Brier Championships, and three World Championships. They were the only team, at the time, to win four Brier championships with the same members.  They also were the first team to score a ‘5’ on any single end in the World finals.  As innovators, they promoted the use of the ‘numbered zones’ to communicate the weight (speed) of the curling stones.

The team’s success at the provincial level carried on to their play at the Brier as they placed in the medals all five years.  They captured the Brier trophy in 2001, 2002, 2003 and 2005, and a silver medal in 2004.  At the 2003 Brier, the team went through the competition undefeated and all four members were named to the First-team All-Stars.  For the third time, David Nedohin received the Hec Gervais Award as the playoff’s most valuable player.

They finished fourth at their first Men’s World Curling Championship in 2001, and went on to capture gold at their next three appearances in 2002, 2003 and 2005.  The 2005 victory wasn’t easy as the team finished the round-robin tied for first place with five other teams.  The Ferbey four had an opening record of four wins and three losses and battled back with eight straight wins - including an 11-4 victory in the Championship game against David Murdoch’s team from Scotland.

Each team member contributed their own unique and integral skills to form a strong and supportive team structure.  Earlier in his career, Randy Ferbey had been the third on Pat Ryan’s team.  As the skip with the Ferbey Four, Randy continued to throw third stones and had his third, David Nedohin throw the final two stones.  The format worked incredibly well for the team and Nedohin became known as one of the best shot makers in the game during their championship run.

“The Ferbey Four strategy; Third David Nedohin had near perfect shot-making ability (often in the high 90th percentile); Second Scott Pfeifer and Lead Marcel Rocque were tremendous throwers repeatedly out-performing their opposition and perhaps best known as ‘Huff and Puff’, one of the strongest sweeping front ends this sport has seen.  The foursome was truly a team with every member an important and integral component.  And they drew strength from their friendship on and off the ice.”

The team always took time for the curling community as they made themselves available for public engagements and interview sessions in the Brier Patch, at bonspiels, and tournaments.  They were true ambassadors of the game and continued to promote the growth and development of the sport after they retired from competitive curling.

For their accomplishments, the Ferbey Four were inducted into the Edmonton Sports Hall of Fame in 2002, and the Strathcona County Sports Wall of Distinction at Millennium Place in 2011.  They were named the Canadian Sports Award Male Team of the Year in 2005.